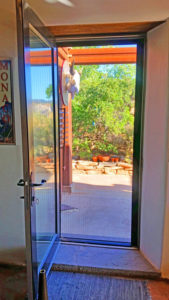 Traditionally, screen doors were all about function. We put up with the slamming, tearing and inconvenience because the alternative was either a stifling hot home or flies on the pies.

Times have changed and so have screens. Retractable screens are there when you need them and virtually disappear when not in use. This means you can have that fly-free pie and eat it too.

Screen Solutions’ owner, Douglas Bennett, just returned from Santa Fe, New Mexico.  It was there that he had the pleasure of helping a friend, client and, most-notably, renowned Native American artist, Doug Coffin, to have just this kind of function and form in his Southwestern style abode.

Coffin, whose paintings and sculptures have been featured in Embassies and private collections all over the world, has two Plisse retractable screen doors installed in his Santa Fe home.

“My retractable screens have really enhanced the use of my studio as well as the fulfillment we get from our home.  Access to and interaction with the natural world outside is important in my work and my life, and these screens give me just that,” says Coffin. 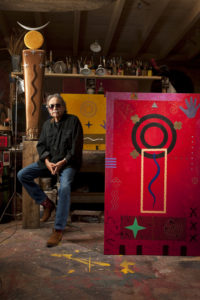 The artist, Doug Coffin, in his studio.

“I am proud to say that our screens don’t detract from either the awe inspiring mesa views surrounding the home nor the gems of art found throughout its stucco interior,” says Bennett, known online as Doug, the Screen Guy.

The home embodies the warmth associated with Southwestern style and the views enhance the aesthetic at every opportunity.

“It would be a real shame if the screen doors took anything away from that natural beauty of this home and its surroundings,” says Bennett who also says that this is a major selling point for his retracting screen doors.

Customers appreciate being able to open the doors and windows of their homes and use the screens to keep bugs outside.  But when the screens aren’t being used they simply retract back into their housing, practically disappearing from sight.

Coffin’s vibrant work of totems and paintings have been featured everywhere from The Grand Palais in Paris, the John F. Kennedy Center for the Performing Arts, the National Museum of the American Arts, the Heard Museum and even the Screen Guy’s own home in the hill country of Central Texas. 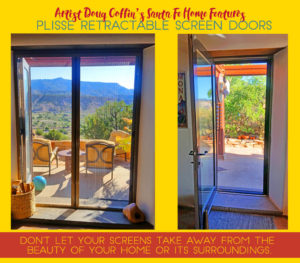